The transition from the economy of attention to the economy of relationships has changed the paradigm of digital strategies, placing at its center a new growth tool that allows the establishment of a unique and transparent relationship with one's audience: influencer marketing.

WHO ARE THE INFLUENCERS?

We are talking about both real web celebrities and creators able to establish a one-to-one relationship with their community, a peculiarity that gives way to a strong bond of trust. Through their social channels such as Youtube, Instagram, Facebook, Pinterest and finally, Tik Tok, they have managed with their talent in a particular sector to create virtual spaces, in which to successfully transmit their values, in which the same audience recognizes itself.

The role of influencers is to spread messages through a multi-channel social approach, conditioning the opinions, choices, tastes and above all the behavior of their followers; which is why they are called "Influencers".

In this new marketing hub, new strategies have found space which, through the collaboration between communication agencies and influencers, have managed to authentically and credibly promote the brand by focusing on:

Starting from an accurate analysis of the opportunities deriving from the implementation of this tool within a more complex digital strategy, we decided to seize it for our client Saint-Gobain Italy, a leader in the construction sector.

The goal is to build a content creation project that would allow an audience expansion and be able to consolidate the brand and its core values in the minds of current and potential consumers.

WHAT STRATEGY HAVE WE ADOPTED? 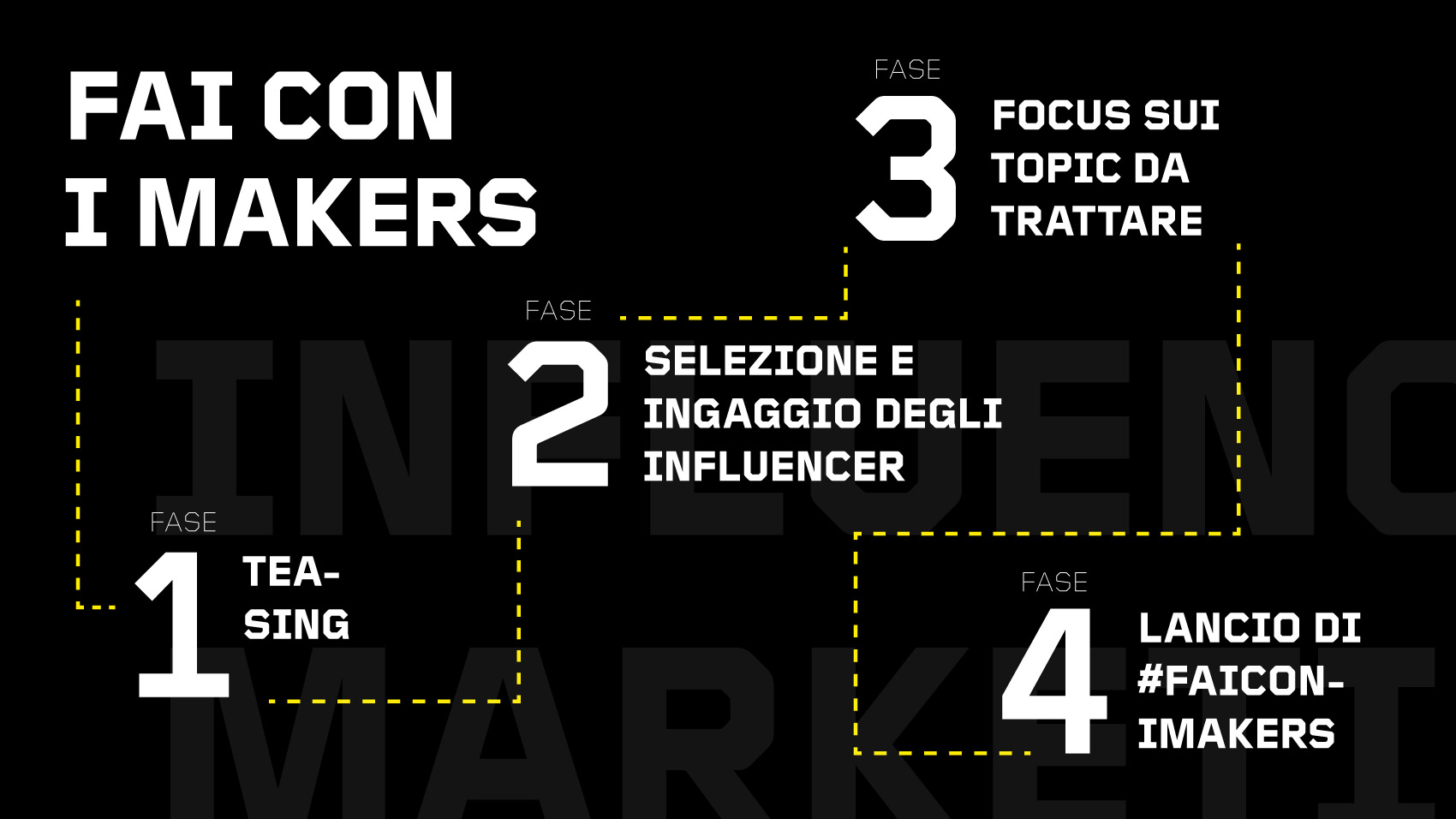 We started by carrying out a selection of the influencers to be hired, classifying them according to the media reach and the characteristics of the target audience, with particular attention to reputation and credibility.
Subsequently we started a study of the topics and of the methods of execution of the projects with the makers. The focal point of our strategy was to establish a collaboration between the company and the influencer based on the integration of the brand's messages with those of the maker and his communication style, so as not to betray the trust of his community, already consolidated and loyal to contents perceived to be genuine.

We have set up different projects depending on the influencer and the communities involved, studying with the customer the range of products to use and promote, agreeing every single piece of the strategy with the makers and establishing long-term collaborations

We subsequently moved on to the launch of online content with the "#FaiConIMakers" project, planning the constant monitoring of engagement data including: impressions, views, community comments, measuring the sentiment of followers towards the proposed projects, immediately noting results that have strengthened our strategy for the client.

In order to increase awareness and consideration for the brand, we added the planning of a series of related actions to the influencer marketing strategy. Primarily the activation of social media marketing campaigns on Facebook, Instagram and Pinterest and the implementation of a section dedicated to #FaiConIMakers on the sg-lifeupgrade.it website, portal of contents dedicated to the Saint-Gobain Italia concept of multicomfort, to be enriched with articles related to influencer marketing campaigns and thus allow an in-depth study of value.

The goal of the activity is to consolidate the reputation of the brand and make communication all-encompassing at multiple levels. The digital credibility of the Saint-Gobain ecosystem will be strengthened through the ability to produce content, intercept trends and engage the right players.
The makers chosen from among those most in line with the brand, through the different formats and communication styles, represent for us a precious tool to enter into relation with the desires of the Saint-Gobain Italia target.

THE MAKERS INVOLVED: TO EACH HIS OWN PROJECT 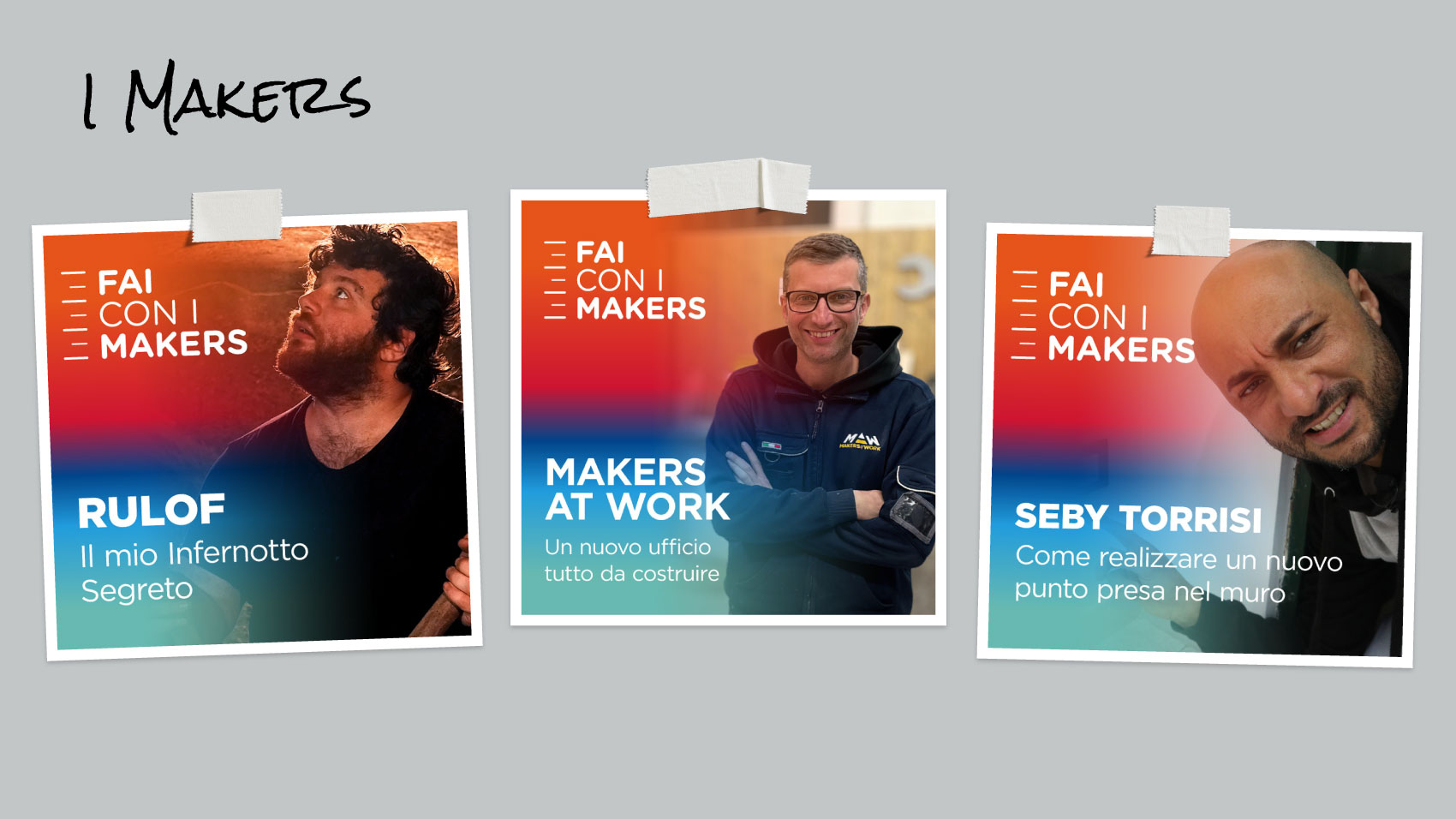 500 thousand subscribers on Youtube, over 250 videos and 75 million views. It makes reusing its trademark.

For #FaiConIMakers, Rulof ventured into the renovation of a Turin infernotto, dealing with the disposal of the rubble and the related redevelopment project with the collaboration of Saint Gobain technicians.

Giuseppe Conte founder of the Makers at Work channel with 126 thousand subscribers on Youtube. Industry expert in wood, metal, concrete and resin processing.

“Seby Torrisi Creative Solutions” is Sebastiano Torrisi's channel with 80 thousand followers. He entertains his community through the tutorial format in the field of home DIY and beyond.

For #FaiConIMakers, Seby Torrisi proposes through his channel a series of restoration and installation interventions and solutions using the materials supplied by Saint Gobain Italy.

These are the profiles of the first makers selected in a broader project lasting one year, which over time will see the involvement of other influencers for what is in effect a cross-media strategy.